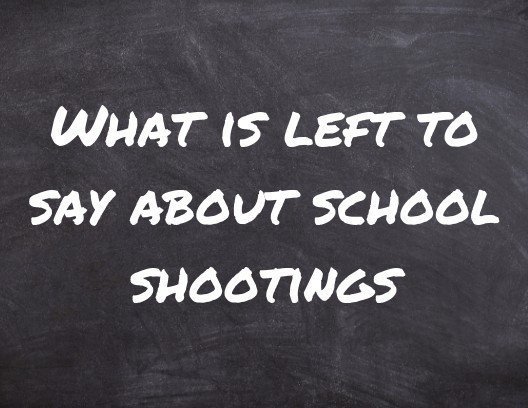 This post has no pretty pictures. No distractions to break up with long narrative ahead of you. I hope you’ll read to the end because we desperately need to consider what you’ll find here.

I was on my way to meet some therapist friends for coffee this morning and was frustrated that I was going to be late from sitting at the same red light 10 times and still not anywhere close to getting through it when I heard the news.

There was a school shooting. Another one. This one right here at home.

I gave a moment of silence in the sadness as the gravity of the situation hit me on my car ride to the doctor. That moment turned into a few hours before the need to write this post couldn’t be held in any longer.

Here we are again. My heart aches for the kids at school, the families who were waiting to hear if their kids are alright and the family of the one kid who lost his life. And I realize that a moment of silence is really the only good thing we are currently offering.

I almost didn’t publish this post. In today’s world, we have enough rants on social media that give the illusion of contributing to the cause without actually offering anything of value and I don’t want to be yet another distraction.

If I’m honest, I’ve also seen the posts begin–the “if you don’t agree with me on this, we aren’t friends” and I hate not being liked. Not feeling accepted. But I’m putting on my big girl pants, getting brave and sending this out anyway because I think it needs to be said.

It’s dangerous to be a student in America these days. School should be a place of safety but it’s turned into a war zone. I don’t remember ever having drills for school shootings when I was a kid but they are common place these days. When you consider that I’m only 28 years old, that shift happened in a really short amount of time.

It all started with Columbine in 1999 and every year seems to be worse than the one before. Somewhere along the way, we shortened our moments of silence and replaced them with finding blame for the victims and getting gridlocked in our political discussions.

This morning’s shooting by my house was no different. Before kids were even released to their parents, the same tired argument began. “Get it together, America, we need gun control!” “Here we go again, gun control won’t fix the issue. Guns don’t kill people; people kill people!”

When will we be tired of enough of our kids being shot to change the conversation? When will we get tired of this boxing circle we’ve gotten ourselves into? It’s the same pattern we’ve been in for years. We argue over gun control, neither side will budge, and we do nothing until the next shooting happens. Then we just start the same process all over again. More kids die, more gridlocked arguments from our entrenched political sides, then nothing until it all happens again.

It makes it seem as though we–on both sides– care more about our political persuasions than we do our children.

I know enough wonderful people on both sides of the aisle to know that’s not true but I wonder if we’ve considered that without realizing it, this gridlock we’ve gotten ourselves in has prioritized politics over the lives of our kids.

When you consider that regardless of what we say our priorities are, the proof is in what we spend our time, effort, and resources on, an uncomfortable reality takes shape. Yes, we’re engaged in the gridlock because we love our kids, but we never get passed it because we’re too tied to our politics.

We all like to look at ourselves as the protagonists of the story. It’s why we can overlook the ways we contribute to the stalemate and focus on what other people should be doing different. If we are the protagonists, it’s easy to buy into the idea that anyone who opposes us is the villain. The enemy.

But only a true sociopath wouldn’t care about children dying.

That means we’re actually all on the same team. We all want the same thing, we just can’t agree on the best way to get there. Seeing each other as the villain keeps us from working together to reach this common goal.

Each side wants the other to cave. But that’s not how difficult conversations work. At least, not effective ones.

If we want to be effective in our discussion about school shootings and making our schools safer, everyone has to be open. Everyone has to give a little bit.

And we can’t keep shutting down conversations with adages like “if you don’t agree, we can’t be friends” because how are we EVER going to change such a major problem if we can’t even talk about it with anyone unless they already agree with us?

Consider for a moment that there may be more than one way to address this issue and instead of insisting on the ONE that you think is best or the ONE you think absolutely won’t work–leading us getting gridlocked again— let’s try instead for a solution we can discuss without stalling. Because at this point just about ANYTHING is better than the nothing we’ve been doing or years.

We keep focusing these conversations on what everyone else needs to change. The problem is, you can’t control everyone else. If your solution begins and ends with everyone else changing or agreeing with you that’s not a solution.

Asking yourself what other people need to change to contribute to this conversation is a waste of time. The only valuable question is what can I do or change or offer than can contribute to a solution.

I don’t have all the answers and I’m not pretending to. All I want is for us to be able to discuss this without getting stuck and becoming even more polarized than we already are.

That No means we’re all on the same team so let’s stop fighting over which bat is the best one to use and get in the damn game. Sorry, got a little heated there…my apologies.

All I ask is for you to be open.

If you are committed to gun control, I’m not asking you to change your mind. I’m only asking you to be open to the idea that there might be other things that help.

If you are staunchly against gun control, again, I’m not asking you to change your mind. I’m only asking you to be open to the idea that keeping guns away from our kids is be an important part of the conversation.

I’m not asking either party to change what they think is best, only to be willing to engage in a discussion where your motivation is to understand another and collaborate rather than be “right.”

Is it so crazy to think that people who don’t agree with you might still have something valuable to offer to the conversation if we just listen?

If you can’t be open in the conversation and just want to do your social media rant with all of the crap listed above, do us all a favor and stop. You may think you are advocating and you are “peacefully protesting” but in reality you are just helping us get gridlocked once more and it would better for all of us if you just when back to the moment of silence.

Let’s start a conversation that continues past the political differences. One that doesn’t get stuck after the first idea thrown out. One where everyone remains open to ideas and communicates without stalling out in assumptions and polarizations. One that keeps our kids safety at a higher priority than our political platform.

Please, please, please….let’s have THAT conversation. Not the same old tired, worn arguments we’ve been in for the last 15+ years.

Let’s start something we can finish without stalling out. We’re on the same team; let’s act like it.

Because what is left to say is so much more important than what has already been said.