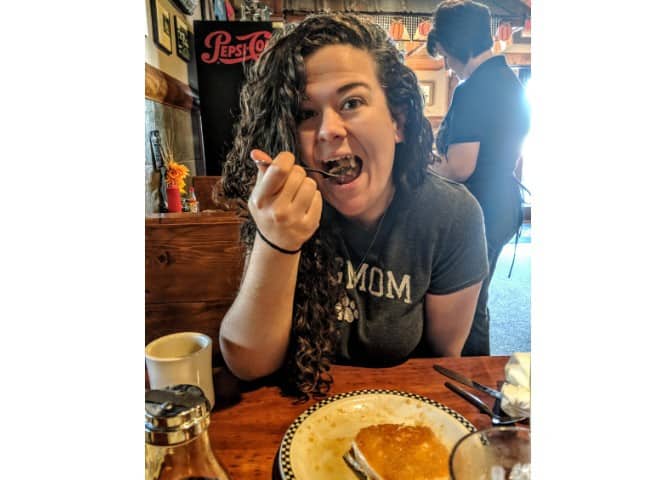 In March of this year I was diagnosed with celiac (more about that here). I thought everything was fine once I got the diagnosis–I had some rose colored glasses on thinking “No big deal! I didn’t need donuts and pizza anyway…” That denial lasted for a few weeks before it hit me pretty hard that no more donuts and pizza was a big deal to me. There’s a big difference in limiting your donuts and pizza and realizing you actually can’t ever have them again.

In case you didn’t know, celiac is an autoimmune disorder in which your body mistakes gluten as a foreign invader and forms antibodies to attack, causing damage to your small intestine. Even minuscule amounts of gluten–I’m talking so small you can’t see it has the ability to create long lasting damage to the body of someone with celiac. That damage puts a person at risk for a host of life-threatening illnesses so taking “just a bite” of that cake is off the table if you don’t want to increase your odds of cancer.

All of this means that having celiac means that I have to be very cautious about the food that I eat–even those that are naturally gluten free. Say I come over to your house and you made  yourself a sandwhich and me a salad but you didn’t wash your hands before you touched my bowl or my greens…I know how trace amounts of gluten all over my food and will likely spend the next week sick. Lets say you remembered to wash your hands right before you made my salad but yesterday you made a sandwhich and didn’t wash your hands before grabbing that same lettuce and putting it on your sandwhich. Yep, that too, will make me sick.

Having to be that careful about everything eventually got to me. I was about 3 weeks in when I realized the full impact this would have on me. Every time I eat at someone’s house I have to start with the awkward conversation about why I won’t be eating their food and hope they don’t get offended. Then I have to prepare and bring my own food, or if I didn’t have time to prepare, sit and stare longingly at the food everyone else is enjoying. So much of our socialization and culture happens over food. I never realized that until I couldn’t participate. For a while, it felt pretty lonely.

Eating out at a restaurant is a scary gamble. They said they changed their gloves, but did they? I only ordered a salad, what if they just picked the croutons out instead of making a fresh one? Will the person be kind and accommodating or rude and argumentative? I once had a restaurant worker argue that their flour tortillas were gluten free. I pointed out that even the website said it had gluten in it. She still didn’t take the precautions I needed because she didn’t believe she needed to and I got sick for a week. And you can forget drive thru food or take out.

Just about everything I eat has to be made from scratch. It’s not uncommon for me to go to the grocery story and wander aimlessly, working myself into full bitterness because I can’t find something quick to eat and I’m too tired to cook. Then I come home hangry.

It’s been a huge adjustment period for me and as I’ve continued, I’ve gotten less bitter. It’s still hard when you go out with friends and can’t eat anything on menu or you get a major craving for your favorite food and remember you can’t have it. With time, though, most of that has dulled.

Celiac highlighted a hidden sense of shame–brought it to my awareness and overwhelmed me for a while. In the beginning, the hardest thing for me was to go to a restaurant and have to ask the staff to take special precautions with my food. I was terrified that they would be rude or wouldn’t take me seriously but mostly, I felt ashamed to ask people to go out of their way to help me. Even when I was paying them to do so. I avoided it for the longest time because I was so afraid.

I realized that having needs felt unacceptable. Inconveniencing someone  else, even in such a minor way,  felt like I was being a burden. I know some of you can relate to this–maybe no directly with the connection of asking for food but to the feeling that you aren’t allowed to need anything from anyone. That you are there to take care of people not be taken care of. In my naivete, I didn’t think I had this shame but through this process it was uncovered for me and I began to see it’s threads have been in my life all along.

I avoided eating out so that I could run from this feeling of shame. At some point, I realized I’d have to face it. We can’t just run from our fears and hope they go away–especially not when running from those fears effectively cuts you off from social support (I mean, how often do you hang out with friends without it somehow involving food?). It was terrible at first. I would get so anxious and overthink they entire thing. The thing that helped me the most was having AJ with me for support. I found that his presence helped me practice asking for my needs. I was still pretty scared, but with that support I could bring myself to try.

I still get anxious sometimes having to ask for what I need but now that I do it more, the fear becomes less and less. I think there’s a life lesson in that. Avoiding your fears and running from shame only serves to reinforce that you really can’t handle it and there’s something worth running from. Facing your fear is terrifying at first and sometimes you need some extra supports in order to make it happen–but facing it helps the fear lessen in time.

What I’ve learned is that it’s okay to have needs and to need something from other people. And when it feels like that’s not okay, it’s worth it to do it anyway.