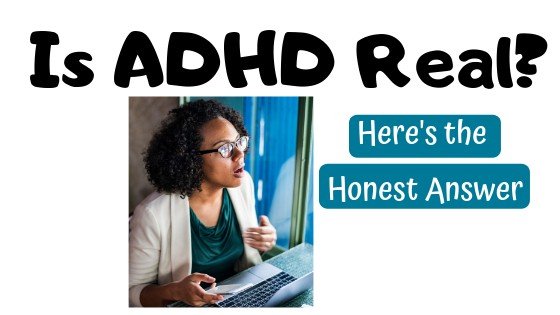 Google “Is ADHD real” and the first hit that pops up is a misguided article from what you might think would be a trusted source. A therapist wrote it and it’s…WRONG.

Does it bother you too? If our doctors and therapists are so misinformed about ADHD, we’ll keep getting misdiagnosed. And continue thinking we’re just lazy, crazy, ditzy, dumb…

And keep feeling like crap. All because so many of our medical professionals still don’t get it.

In true ADHD fashion, the injustice of it all made me mad. After stewing about it for a bit, I decided I need to write a real answer. An honest and informed answer to the question. So that when you’re asked, you’ve got a ready response.

Hey, I said it was the honest answer! You want more explanation? Fine, keep reading…

Ok, What is ADHD?

ADHD is a neurological disorder that causes difficulty in areas of executive function like planning, organization, attention and memory, etc… You know, all those great adulting qualities.

The brain of a person with ADHD works differently than the brain of the majority of people. It prioritizes interesting over important. When understimulated, it struggles to regulate attention or follow direction appropriately.

Most people can relate to some of the symptoms of ADHD, some of the time (which might be why they don’t think it’s that big of a deal).

Everyone has misplaced their keys. Everyone finds it harder to do something they find boring. Most people have had a hard time concentrating or paying attention at some point.

For most Non-ADHD people, this happens sporadically and may be related to a poor night’s sleep, having extra stress, or not eating enough that day.

For an ADHDer, it’s almost constant. And no amount of consequence changes the inevitable. It’s not because we are stupid or don’t care, but because the ADHD brain is working against us.

Studies show that ADHDers actually work harder than other people to manage life, work, and relationships but accomplish less than they are capable of and often less than others who aren’t trying as hard. It’s ironic really, considering most of us have been told we should just try harder…

Related: How to Master that To-Do List When You Have ADHD

How do you know ADHD is real?

I’m so glad you asked!

In the last couple decades, so much research has been done to better understand ADHD.

We’ve been able to see the evidence of it as a neurological condition through genetic studies and high resolution scans of the brain.

Identical twin studies having only one twin adopted out of the birth family have been able to show us that ADHD runs in the biological family. But not the adoptive family.

This presents pretty strong evidence that ADHD has nothing to do with your environment or the way you were parented. You’re symptoms weren’t created based on who you were born to or how you grew up.

Imaging (like MRI) has shown that the brain of an ADHDer is smaller in certain key areas (like the frontal lobes) that correspond with the executive functioning deficits (ie attention, organization…).

Brain wave scans (like encephalograms) have shown abnormal activity in the frontal lobe region of ADHDers. The frontal lobe is largely responsible for things like planning, consciousness of the consequence of behavior, attention, self control…

A deficit in the frontal lobe region corresponds with all of the symptoms of ADHD.

Related: Secret and Signs of the ADHD Woman

Related: I Should Have Known it was ADHD When…

ADHD is just an excuse for bad parenting

Did you know that people used to believe that bad parenting was the reason for schizophrenia? Thankfully, most have come to their senses on that one and realize that schizophrenia is a neurological condition.

For some reason, society goes through a cycle of disorders they want to blame on parenting.

There are negative effects of unhealthy parenting patterns, but ADHD isn’t one of them.

Again for the people in the back, ADHD is a neurological condition.

The lack of self regulation has nothing to do with our experiences or home life. Its the way the ADHD brain is wired. “Perfect” parents could still have ADHD kids. Just like abusive parents can have neurotypical kids.

ADHD is made up by big Pharma to get money

This one kills me.

It’s like saying Diabetes is made up by big pharma to get more money. Or allergic reactions, MS, heart disease…

Heck, that’s like saying Big Pharma made up headaches to get you to buy Asprin. Doesn’t that sound crazy?

You take medication for anything? Big pharma makes money off of it.

Some have pointed out that pharmaceutical companies fund ADHD research. And say that, as such, none of the research is valid.

Sometimes, pharmaceutical companies fund the research for ADHD. Other times, they don’t. Sometimes they fund it for any number of other medical conditions.

But, thankfully, researchers are required to disclose their sources of funding. If big pharma funded it, it’s in the report. You can find studies without that conflict of interest.

Spoiler alert: they still prove the existence of ADHD…

With this argument, you can prove that pharmaceutical companies make money off of ADHD (like they do allergies, migraines, and a host of other issues).

But you can’t prove that it’s made up.

Everyone has “ADHD.” Saying it’s a disorder is an excuse to be lazy

So everyone has a neurological disorder? That’s strange. I’m assuming what is meant here is that everyone can relate to ADHD symptoms in some way. That’s probably true. Everyone has lost their keys at some point. And has occasionally zoned out on something important. Everyone has felt restless.

But, that’s not ADHD.

ADHD is a constant struggle with those symptoms.

A constant struggle that a person has little to no control over without help.

To the point that many people with ADHD have faced major consequences related to these challenges. Many feel shame, exhaustion, and sheer defeat because they keep trying to control their attention but it’s gone well before they even realize it.

It’s daily, minute to minute. It’s not being able to hold down a conversation because 50,000 thoughts are trying to interfere while you’re talking.

Related: When You Think it’s Anxiety, but it’s Really ADHD

Related: A Holistic Approach to Making ADHD Work for You

The closest a person without ADHD may be able to relate is to think of the worst day. One where you’ve had:

Rough, isn’t it? Think of that, except every day is like that. No matter how important it is for you to be paying attention, you’re stuck in that lecture hall just trying to make it through.

For the ADHDers who struggle on a daily basis with this constant battle, we know that it’s much more than Becky’s so called “ADD acting up a little today!”

Related: When You Aren’t Living Up to Your Potential, Could it Be ADHD?

Related: Signs of ADHD (As Seen on TV!)

There is no doubt that childhood trauma can mimic ADHD symptoms. Kids may show hyperactivity from internal distress over what they’ve experienced. They may have racing thoughts and act out. Along with impulsivity and lack of focus.

On the surface, ADHD and PTSD from childhood trauma can look the same or very similar.

To make it more complicated, a kid with childhood trauma can have ADHD on top of PTSD. That’s why it’s important to work with a professional that is familiar with both.

BUT just because the two look similar and can overlap, doesn’t mean they are one and the same. PTSD and Bipolar Disorder can look similar, too, but they are different.

Not every child with ADHD has had childhood trauma and vice versa. To keep this view consistent, you’d have to assume that every person with ADHD had some form of trauma. What would you make of those who didn’t? Assume they were lying?

There is proof that both ADHD and PTSD are real. Both real, but DIFFERENT.

ADHD is a neurological disorder. PTSD is the result of painful and terrifying experiences that human beings shouldn’t be subjected to (but unfortunately are).

They aren’t the same thing. And ADHD isn’t just PTSD in disguise.

This one I find particularly strange and interesting.

By “founder” of ADHD, I assume they mean the first person who made a large contribution to the research efforts. I’m always suspicious of famed “death bed” confessions. In this case, it turns out I’m right.

Typically, this argument is describing Dr. Leon Eisenberg but calling him the “founder” “father” or “inventor” of ADHD is problematic. He contributed to research on both ADHD and Autism in a big way (circa 1950) but knowledge of ADHD didn’t start with him.

So, to start off, the argument is flawed. But it continues…

What Dr. Eisenberg actually said was that he believed the genetic predisposition of ADHD was overestimated. So he thought that it wasn’t genetically handed down to the extent that people claimed.

That’s a far cry from saying he made the whole thing up.

Plus, we’ve done a lot more research since he said this and discovered that actually it IS highly genetic.

That is true for just about any disorder (and many diseases, too). That’s not an indication that the entire disorder is made up, only that screening practices need to be more rigorous and accurate.

At no point did he say that he made it up. AND he’s not the “father of ADHD.”

In other words, say no to conspiracies.

That’s my goal. To stop the ignorance because misinformation like these listed above hurt people with ADHD. These inaccuracies prevent us from getting life changing treatment. They keep us ashamed of ourselves and frustrated that no amount of trying seems to be enough.

ADHD is highly treatable but most people (women especially) with ADHD are still undiagnosed. Why? The misinformation and the stigma that prevents people from getting the care they need.

Much of the information in this post was found in the books, Delivered From Distraction and Adult ADD: The complete Handbook .

Both books give really great info about the research behind ADHD as well as some good info and strategies for managing. They are both worth your time.

Research: Evidence and Belief in ADHD

The Experts: The Science of ADHD

These are some of the craziest things I’ve heard people say about ADHD. What have you heard? Tell me in the comments.

Please share this post with your people. They need to know that ADHD is real and it’s often helpful for them to see how it is we know that to be a fact. More knowledge often leads to greater understanding. We need that, no?