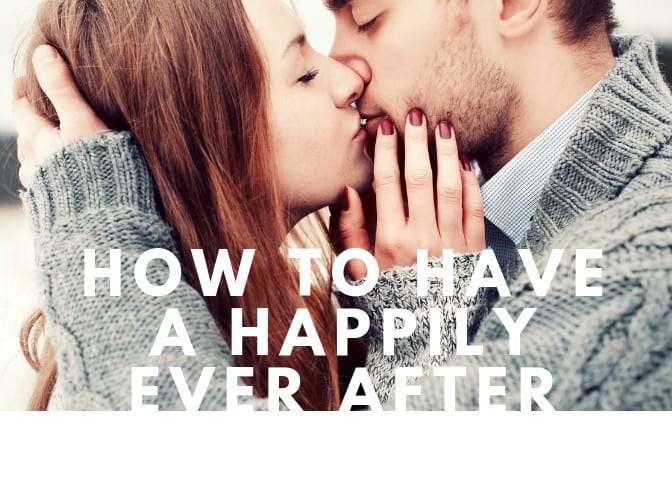 In a little over 2 months, AJ and I will be celebrating our 10 year wedding anniversary. We were set up on a blind date when I was 17. His cousin was a customer where I worked and she got a wild hair to play matchmaker. The rest is history.

People really discouraged us from marrying so young–I was 18 on the day we said “I do.” My parents weren’t happy about it. When I went shopping for the wedding, store clerks tried to tell me that getting married at my age was a mistake. We were too stubborn to listen but it’s worked out pretty well for us despite a number of difficult times. Over the last 10 years we experienced job losses, living with family members, the death of AJ’s Dad, his mom’s diagnosis with cancer and a fair amount of family drama. We’ve made it through.

That got us to thinking: What are our top tips for being happily married? We decided to each come up with three tips (separately) to see if we were on the same page. You be the judge.

1. Make Sacrifices for Your Spouse

My favorite way of defining love is from Catholic Bishop Robert Barron. He says love is “seeking the good of the other as other.” This definition is sorta strange, but the point is to seek the good of another without any mix of personal agenda. Sacrifice doesn’t have to be something huge. It can be as small as doing chores or as large as moving to a new city, so your spouse can pursue career goals. Tia has done these for me.

2. Take Interest in Your Spouse’s Interests

I learned this one from my old man. I developed a love for football when I was in middle school. My dad kinda liked football, but he was far more interested in NASCAR. We went from watching our sporting events in separate rooms to watching them together. We accomplished this by flipping back and forth from the game to the race. One day I overheard my dad telling my mom the only reason he was getting into football was because I liked it. It became such a large part of our relationship that I wore a Cam Newton jersey to my dad’s funeral.

Tia is not always interested in the same things I am and vice versa. We don’t have many common interests. However, we love spending time with each other. To do this, Tia must watch football on Sundays. (Ish. She is usually playing on her computer. She gets points for being there.) I must be willing to try gluten-free foods and play with dogs. Trying to take interest in your spouse is never wasted energy. Sometimes you’ll even discover that you have a new thing in common, like eating Indian food or going to musicals.

3. Choose Your Battles with Your Spouse

The ancient Chinese general Sun Tzu said, “He will win who knows when to fight and when not to fight.” What is the reason for your arguments with your spouse? Sometimes good people disagree over important issues. Sometimes arguments are far less noble. Is the argument because of a personal issue and your spouse is in the wrong place at the wrong time? Do you just want to get your way all the time? Marriage shouldn’t be a power struggle. Self-awareness, self-confidence, and common courtesy can eliminate many arguments in marriage. Besides, if you’re both willing to make sacrifices for the other, it will reduce arguing anyway.

I figured AJ would laugh when my first tip was about making apologies to each other. He’s always been really good about that–I’ve had to learn. In the beginning, I had a really hard time admitting when I’d been in the wrong. It drove me crazy when he’d point out that my “apology” wasn’t actually an apology.

“I’m sorry that you felt I was being rude.”

“I’m sorry that you took that the wrong way.”

Yeah, I’m cringing while writing that.

Apologizing is a real challenge, especially when you’re in the middle of an argument and you don’t want to admit fault. I can’t say that I’m perfect at it, but being with AJ (who doesn’t hesitate to admit fault) has helped me learn to get better at this. It’s really hard to be in a relationship with someone who never takes ownership of their part in the problem, argument, or relationship. He was patient with me and I make it more of a priority to admit when  I’m wrong, take ownership of it, and work to improve it. Don’t be too proud to make amends. Your relationship won’t survive that kind of pride. It breaks the trust and connection you need to make a relationship work.

2. Help Each Other Heal Insecurities

This is one of my favorite parts about our relationship. You see, AJ always wanted to be considered “the best” at something and I always wanted to be someone’s “favorite.” Somewhere along the way it became a habit for us to tell the other person “You’re the best!” or “You’re my favorite.” Every day. Multiple times a day. We argued (play argue that is) over who was the best for so long that we finally decided to assign each other days to be the best. AJ is the best Mondays, Wednesdays, and Fridays and I get Tuesdays Thursdays, and Saturdays. We both get Sunday she we can continue the argument 😛

We learned each other’s deepest desires early on in our marriage and 10 years later, we still make it a priority to build each other up. Now that I think about it, being someone’s favorite isn’t really an insecurity I feel much anymore–I’m AJ’s favorite.

3. Respect Your Spouse: Time with Other Men/Women

I’ve seen this really fall apart with couples. You clock out and some women from the office invite you out for drinks  before you go home but you get angry when your wife takes issue that you went out with other women. Or it annoys you when your husband comments on how much time you spend talking to your best guy friend. You get angry and frustrated–She doesn’t trust you! He only ever thinks the worst about you! And the anger spirals into an argument and creates distance in your relationship.

No one, and I mean no one, is incapable of cheating. We’re all susceptible and when your marriage is a priority, you need to safeguard it. That doesn’t mean you can never hang out with other men/womenbut it does mean that you should respect your spouse’s fear/insecurity/concern. AJ used to ride to law school with a girl from his class. She was beautiful and smart–total package.I didn’t feel worried about it and it’s not because I’m so overconfident. It’s because AJ checked with me in the beginning and I knew for a fact that if it bothered me, he would work with me, respect what I needed or asked of him. She and I became good friends.

Respect what your spouse needs from you.. When your spouse knows they can count on you to listen and respect what they need around this issue, the issue lessens. Don’t let pride or frustration at the sacrifice get in the way of respect and connection.

Those are our top tips for creating a happy marriage. We shared the with each other and  had fun pointing out the similarities and differences in our ideas.

It’s funny to look at what each of us wrote down because I think it really highlights our personalities. AJ is a critical thinker who tends to prefer non-fiction, learning, and global thinking. I’m a storyteller who likes to be specific and tangible. When you put our tips together, we think they compliment each other pretty well and give you the start of a pretty great strategy for cultivating a happy marriage. But you tell us what you think. Are we on the same page? What would you add?